A fast and furious day provided close and exhilarating racing, mostly in bright sun, for the Black Group classes at Cowes Week.

Although gusts of 30 knots had swept through the central Solent half an hour earlier, the breeze was temporarily down to 20 knots for the start of IRC Class 0 at 1010. Niall Dowling’s Fast 40+ Arabella and Gerd-Jan Poortman’s Ker 46 Van Uden initially led the fleet away towards the western Solent, with all boats tacking offshore into the stronger ebb tide and were soon in the white water beyond Egypt Point.

These boats were overhauled by Tony Langley’s TP52 Gladiator, which finished the 24 mile race with a commanding lead, having completed the course in two hours 20 minutes. However, as the wind picked up on the leading edge of a shower she hit a snag when dropping her kite after the finish. This culminated in trawling the sail in the water, which then exploded into pieces.

Mark Rijkse’s GP42 42 Degrees South was next across the line, more than 10 minutes after Gladiator, but beat the higher-rated boat on corrected time by two and a half minutes. Arabellawas third, less than two minutes later.

“It was very choppy upwind, and tricky to steer,” says Rijkse. “We’ve not had the boat out in big winds this year so it took a while to settle down. She is a slim boat so ultimately we found the groove upwind and we did well there, benefitting from the favourable tide.”

IRC Class 1 had one of the tightest races of the day. At the start Colin Campbell’s Azuree 46 Eclectic responded to the individual recall after the start cannon and returned to start correctly. Tor McLaren’s MAT1180 Gallivanter led away from the line, having started inshore on port tack and clearing ahead of the fleet, steering aggressively to minimise slamming in the steep wind against tide waves. Jan de Kraker’s Swan 45 K-Force and Bertie Bicket’s Swan 42CS Fargowere also very well placed at this stage.

Unfortunately, Gallivanter had started prematurely, leaving another Dutch boat, Harold Vermeulen’s Leeloo, to take line honours ahead of K-Force and Fargo. After time correction these three boats were only 67 seconds apart, with Fargo taking victory. K-Force took the runner’s up spot on corrected time, just one second ahead of Leeloo.

Yes! took the winner’s gun, by a margin of more than two minutes. However, the competition between the next two boats – both J/111s – could not have been closer. Tony Mack’s McFlycrossed the line only one second ahead of Chris Jones and Louise Makin’s Journey Maker ll. 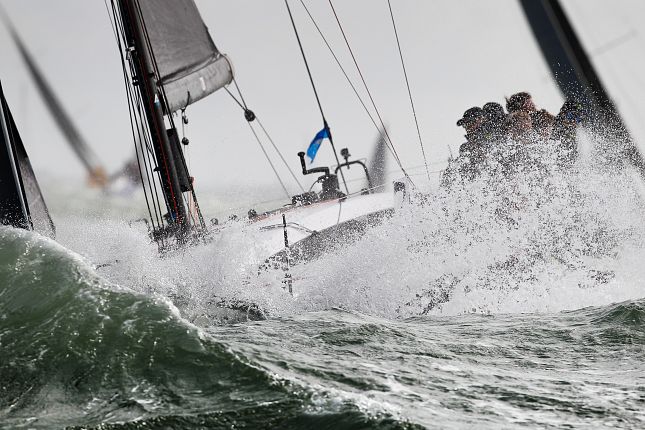 “Today was a day of trying to keep it simple and get round the course safely,” says Ben Field, who was racing on board Yes!. “We refrained from taking any risks and there was no one manoeuvre that pulled us ahead, we just continued to chip away bit by bit and, with some good communication onboard – something we have been working on recently – it seemed to pay off. It was a tough day for the trimmers but they did a great job.”

IRC Class 3 includes, among others, a dozen First 40s, plus Grand Soleil 50 and 43, Max Fun 35, Corby 36 and a J/120. Pete Burwood’s First 40 Sailing Logic Lancelot started a nose ahead at the outer end of the line, with another First 40, Richard Patrick’s Dusty P, on her windward quarter and Andrew McIrvine’s La Réponse just behind, but with more speed. 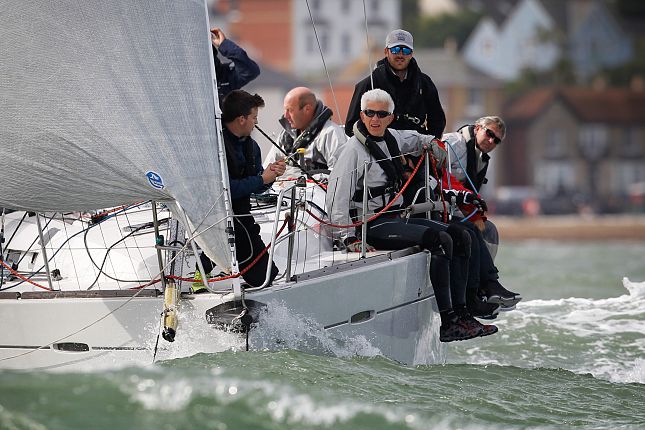 Joe and Rob Bottomley’s Sailplane Bucketlust was also well placed and the first to tack offshore towards the stronger favourable tidal stream. She led the fleet into the finish, more than two minutes ahead of John Barrett and Paul Woodward’s Corby 36 Stiletto – enough margin to retain victory on corrected time. La Reponse was third both on the water and on handicap.

The high-performance boats in the HP30 class also started cleanly, with Glyn Locke’s Farr 280 Toucan in clean air at the outer end of the line. However, the lowest rated boat in the fleet, Jessica Fries’ FarEast 28R Mittens Revenge, was by far the best placed closer inshore, having judged the difficult conditions perfectly to gain a useful early advantage. However, she was not able to maintain enough height or speed to stay ahead of Malcolm Wootton’s Farr 30 Pegasus Dekmarx and another Farr 280, Richard Rankin’s Pandemonium.

Richard Woof’s J/90 Jo 90 was first to retire, shortly after the start, and was joined half an hour later by Toucan. Mittens Revenge also failed to complete the course. Pegasus Dekmarx took line honours by an impressive margin ahead of Pandemonium. Sture Wikman’s higher rated Mcconaghy 31 Vitres crossed the line more than 12 minutes after Pegasus, taking third place both on the water and on corrected time.

In the J/109 class John Smart’s Jukebox led the fleet into the outer end of the start line. But the more interesting action was taking place under the shore, where Kevin Sussmilch’s Sunset Rum started on port tack and cleared just ahead of the remainder of the fleet.

Racing for the White Group dayboats had originally been delayed until just after midday. However, given a heightened risk of afternoon thunderstorms, after consultation with teams on the water at Hamble Yacht Services and Regatta Lets racing buoys, plus the event’s on site meteorologist, race officials sadly had to abandon racing for those classes, along with Cruiser Division D and the GRP Classics.

Nevertheless, the Black Group yachts had good racing, with a growing list of retirements, including a number of breakages and injuries on the water. All casualties were transferred to hospital for treatment and we’re pleased to report the casualty who was airlifted to hospital with a head injury is expected to be discharged within the next few hours.

The day ended with the spectacle of the 50ft foiling SailGP catamarans racing in their inaugural European event. Three fleet races, held in challenging conditions, with big waves at the top of the 1.5 mile long course making bearing away without burying the bows a major challenge, even though skippers were sailing cautiously.

After a slightly delayed start the fleet wowed the huge crowds in the viewing gallery, gathered on the beach near Egypt Point and along the Green. In the first race the USA team had soft capsize when bearing away at the first mark, but managed to get sailing again for the second race. Tom Slingsby’s Australian team sailed a stunning series, taking a big lead in the first race, crossing the finish line at 50 knots of boat speed, and victory in the next two.

Today was also Family Day, celebrating the many family crews that race together – or compete against each other – at Cowes Week. These include families such as the Hill family who have been racing the Contessa 32 Nimbus at Cowes Week for 24 years and sail with three generations on board. 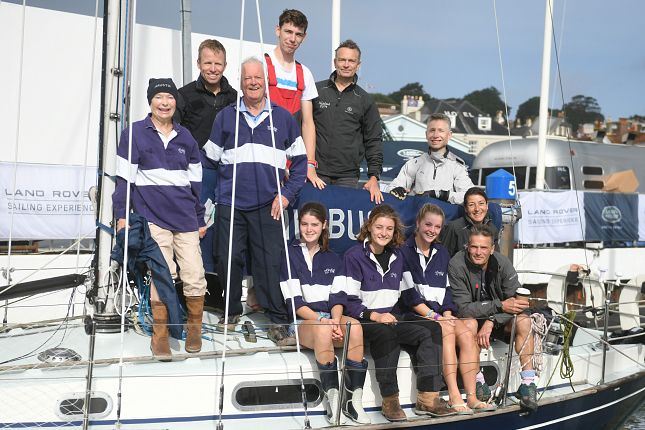 The Hill family has raced the Contessa 32 Nimbus at Cowes Week for the past 24 years. Credit: Martin Allen/CWL